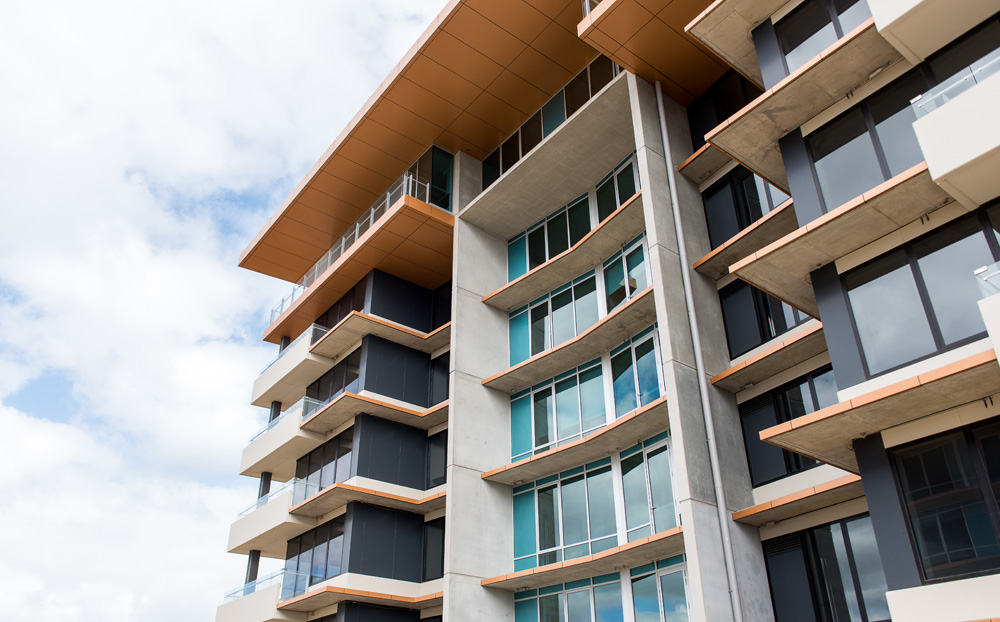 Structural Health Monitoring revolutionises the structural monitoring industry. During these times being able to work remotely, safely and at any time of the day / night makes remote monitoring an ideal upgrade to any monitoring fleet.

Recently we undertook a different kind of monitoring application for one of our customers. A foreshore hire rise building was experiencing unusual noises during turbulent weather events.  These noises were thought to be identified by structural movement of the building leaning towards the structural integrity of the building being compromised.

To undertake this application, we had to determine the possible locations structural movement may be occurring and which of our sensors would be best suited to this application.

After a few consultations with the engineers of the building we decided that the corner facing the foreshore would be the most likely area to undergo any structural integrity changes.

Below is our setup of sensors we used to monitor the building over a period of 5 weeks, ensuring to capture a variety of different weather events and a range of temperatures.

Sensor 04D2 is one of our DECK Sensors, this allows us to measure the dynamic changes occurring on the structure. This was placed in the middle of the buildings roof to ensure to capture as much structural movement data as possible. With the DECK sensor being the most sensitive of all of the sensors placing this in the area that may undergo the most varying changes allowed us to determine where and if any changes were occurring. 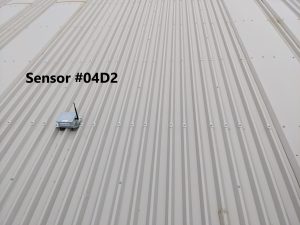 The other sensors placed on the building were 04D7 which is one of our Tri Axis Tilt Meters. Having this right up near the corner of the building would allows us to determine if any movement were occurring and in what direction it would be happening. After installation of the sensors had been completed a 24-hour window was allowed to give each sensor enough time to settle down in its new environment and allow us to interpret the data accurately.

After monitoring the building for 5 weeks we were able to extrapolate the following data from our online portal homing in on any areas of anomaly that may require further investigation.

As you can see below, after the initial installation period of the DECK sensor no excessive frequency changes occurred on the structure for the duration of the monitoring. This allowed us to determine that the structure as a whole was indeed sound and if any movement was occurring on the building it would betaking place in an isolated area on the building.

As we aimed to further determine if any structural movement was occurring we moved closer to the corner of the building by examining the Accelerometer, the below graphs showed us the Accelerations occurring in the Z, X & Y axis.

Other than a single occurrence on the Y axis exceeding the medium threshold, there appeared to be little movement on the structure in the area the Accelerometer was installed.

Below is the final sensors data for the 5 week period. The 04D7 Tri Axis Tiltmeter would determine if any tilt would be occurring on the structure right on the corner of the building. As you can see below on the X & Y axis there is no variation of tilt that occurred during the 5 week window measured.

Same went for the Z axis no variation occurred during the 5 week window.

Being able to gather all this data for the building in question along with the engineers interpretation of the data we were able to determine that it was in fact not the building undergoing structural movement causing the noises the residents were hearing during extreme weather events.

The whole process from start to completion took about 8 weeks, from the initial planning and quotation stage of the project and then gaining authority and clearance to be able to install the Structural Health Monitoring Sensors on the building. Once the project was able to be started it required 2 people to complete the installation of the sensors on the roof and less than half a day to complete the safe installation.

Following the installation all monitoring that occurred was able to be done from our office in Adelaide and all data and discussions with the Engineers was able to be taken place over Email, Phone call and Zoom meetings to interpret any anomalies that had occurred.

Following the completion of the monitoring project the removal of the sensors was completed by the installers and all trace holes on the building were filled to ensure weatherproofing of the structure moving forward.

As you can see the applications for structure health monitoring are not just limited to the conventional methods of high asset monitoring. Short term applications are also a very real possibility. Being able to measure the unknowns and the dynamic displacement of Buildings, Cranes, Gantries, Bridges and infrastructure allows for a more remote structural monitoring and during these current times being able to get accurate data whilst not be on site gives you and your company a huge edge in todays market.

For your next project that comes up think about the possibilities of Remote Structural Health Monitoring and how our Static and Dynamic sensors can be of potential use to your clients and give us a call and see how we can help.