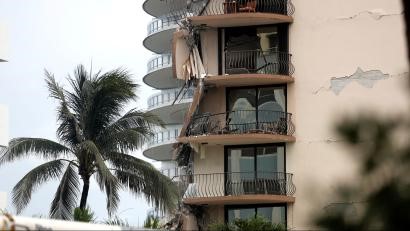 Pablo Rodriguez, whose mother and grandmother are among the missing in the unfolding Surfside, Florida tragedy, echoed a collective angst about the integrity of built structures when he spoke to CNN over the weekend.

After five days working through the rubble of what was Champlain South Towers, rescue workers have reported nine deaths and 150 people still missing so far. Meanwhile, city officials are investigating how a seemingly sound structure can “pancake” without warning—this process could take a while.

What do structural engineers say?

“It’s a tragedy that engineers spend their lifetimes trying to prevent,” says Hanif Kara, the celebrated structural engineer who has erected many ambitious designs by star architects like Zaha Hadid, Norman Foster, and Bjarke Ingles. He assures Quartz that it’s very rare that a structure will suddenly fall. Kara says that regulations are in place to “design out” every conceivable catastrophe, including fires and natural disasters. “There could’ve been a flaw in construction if they didn’t build according to the engineers specifications,” he suggests.

Based on inspection reports released to the public, Kara says that the 12-story, 40-year old oceanfront structure was likely in a state of “progressive collapse where one element that fails burdens the next like a pack of cards”. Structural engineers refer to this as the “Ronan Point collapse,” referring to a 1968 tragedy that began with a woman who lit a match to brew her morning cup of tea.

The gas explosion in her flat blew out the walls, which then triggered a chain of events that caused sections of the 22-story condo in east London to collapse. Four people died and 17 people were injured in the incident.

Kara, who co-founded the UK practice AKT II, adds that there are now remote monitoring tools that allow engineers to monitor the integrity of buildings.

Alexey Sidelev, adjunct professor of structural engineering at New York University, echoes Kara’s opinion. “Buildings do not collapse suddenly,” he stresses. “If there is no obvious external force, then [the cause is likely] a long-term deterioration process, usually manifested in forms of cracks and uneven settlement.”

Not every crack is cause for alarm, says Sidelev, noting that a licensed engineer is needed to evaluate if and how fissures have any effect on the building’s structural integrity. “The first and the most effective measure is to comply with all current codes and regulations during design, construction, and life of a building.”

How Structural Monitoring could have helped with early warning detection.

Through the use of structural monitoring systems placed on the High-rise would have alerted engineers to the shifting and movement occurring inside the structure which eventually caused the failure and loss of many lives.

With the use of Tilt Meters, Accelerometers, DECK Sensors and live notifications the ability to early detect the fault occurring would have become obvious and preventative measures to ensure public safety could have been taken to which repair works could have been undertaken to fix the buildings failing points.

Structural Health Monitoring should be viewed upon as a preventative measure on your main assets as these solutions allow contractors and engineers to get a correct up to date health status of their structure and put in place preventative measures and early repair orders to avoid major catastrophes from occurring.