How an On-Board Weighing System Can Increase Your Productivity

How an On-Board Weighing System Can Increase Your Productivity

Whether you’re working in a quarrying, civil construction, landscape supply, government, warehousing or logistics industry the benefit of having an On-board weighing system on your front end loader, excavator, skid steer, tele-handler, truck or even your forklift can greatly increase a customer’s productivity in many areas of business.  One of the main issues facing businesses in industry today is running / fixed costs and over loading of trucks.  With chain of responsibility laws, the correct loading of trucks is very important in avoiding expensive and unnecessary overloading fines loading of trucks to the correct weight to optimise efficiency and to ensure trucks do not go out under-loaded.  Correct loading is important in making sure you run your business efficiently in today’s tight market place.

An on-board weighing system be used to measure the correct amount of material on the machine you are using.  Loading trucks correctly the first time can spare the operator unnecessary truck movement and the need to either refill or remove material once the truck gets to a weighbridge, saving time and money.

Our weighing systems have been around since their inception in 1988 with sales now exceeding 5000 plus units.  With regular software and feature upgrades to keep pace with technological progress and yet maintain the easy to use features based on feedback from operators, dealers and management.  They are ideally suited to all On-Boarding weighing applications, from a basic forklift lift to front end loaders, skid steers, tele-handlers, excavators and trucks.

The CL2000 is best known for its compact design for basic static weighing applications for forklifts and skid steers. Recently introduced the CL2000 weighing system again a static weighing system the CL2000 is IP69K rated meaning it built to work in the harshest of environments in small agricultural open cab loaders and forklifts where the display is exposed to weather all the time. The CL2000 also has the option to connect to the CL4070 printer to allow you to print off the weighing data.  Along with an option for totalling weight readings. Some recent additional benefits to the CL2000 system include the Mast Tilt reading that allows you to track to what degree the Forklift Mast is being used on, this helps in stopping load spillages and unsafe load weights. A further addition to the CL2000 System is the Red or Blue reverse Lights and Rear Reverse Camera, These features make for a safer working environment for your drivers and staff. Being able to see a clear 240 Degree field of vision behind you and a bright indicator for your workers to see the forklift coming will aid in stopping work place safety incidents. 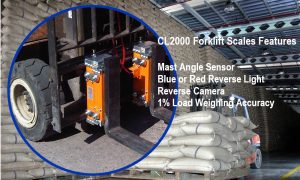 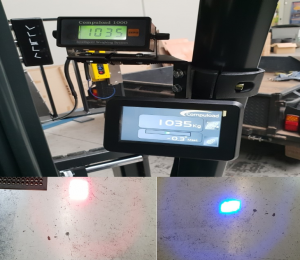 The CL5000 (replaces the CL3000) and CL6000 (replaces the CL4000) can weigh in both static or lift speed compensated / dynamic modes are more ideally suited to a traditional front end loader, tele-handler and forklift Solas weighing applications.  Both the CL5000 and CL6000 will total weigh readings, spilt load a truck and trailer weighs so you see want you have loaded on the truck and trailer separately as well as a grand total. When connected to the CL4070 compact printer this will allow the operator to print this information as well as separate bucket readings and weigh totals in hard copy paper form. The CL5000 is our most popular Weighing system we supply. With an easy to use interface and a simple 1 button printer this makes for the perfect Retail or Internal Weighing System. Able to be installed on a variety of machines from Front End Loaders, Backhoes & Skid Steers you can kit out your entire fleet with the same system making it a system that only needs to be learnt once and not having multiple different systems on site. Typically a 1 day Installation and Calibration process is undertaken to complete the job and all Calibrations are accurate to within 2% of the known loads, so you can be sure your measuring as accurately as possible and saving alot of money on material along the way. The CL6000 has all of features of the CL5000 plus a few more features for operators and managers who require greater control of the weighing process. When used with the CL4070 printer the operator will be able to take full advantage of the extra features of the CL6000.  Such as entering in data against the three default product ID fields, enables the operator to enter a customer’s name, the product being loaded and truck registration number (all 3 product fields can be changed if required) The CL6000 also has a memory function that will allow the operator to store weighing process data within the weighing system for retrieval or printing at a later date. So, there is no need to print each weighing process if it is not required at the time.  The process can be further streamlined by upgrading the CL6000 USB downloading port by activating this so to easily download the weighing data from the CL6000 via a supplied flash drive to transfer the weighing data to your PC. The transferred data will open up in an excel type spread sheet. This will allow management to create to create a permanent record of the weighing data as well as use it to analyse the weighing process.

When it comes to Excavators the 3B6 I View system is the go too system.  If offers many of the same benefits and features of the CL6000, with printing options, downloading options and large full colour display.  The same basic principles apply when getting the correct weight out the bucket.  The I View excavator weighing system requires two inputs, one from the boom and one from the stick to get an accurate weigh reading while a front end loader only requires one input.  It is advisable to calibrate an excavator weighing system on a working stock pile site to allow a full range of motion to get an accurate calibration this means allowing the boom and stick to be below the excavator tracks