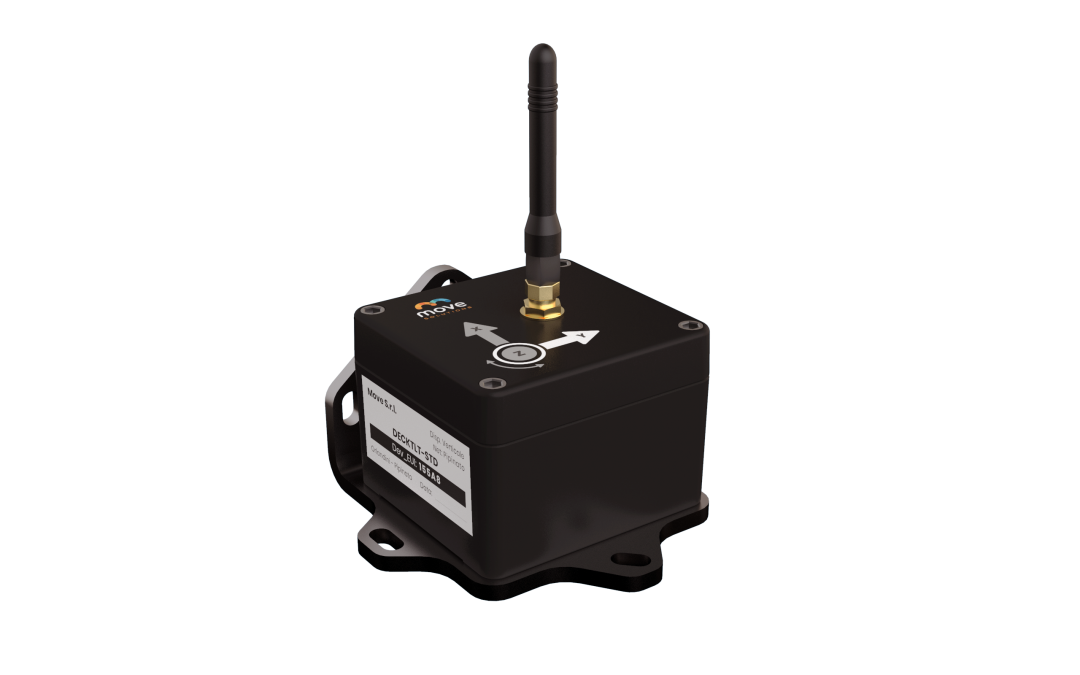 The Triaxial Wireless Tiltmeter is able to measure the variation of the static angular inclination of the structure with respect to the horizontal plane, i.e. perpendicular to the gravitational axis. By installing an entire system it is possible to reconstruct the static deflection of the structure. All Wireless Tiltmeters can be perfectly synchronized with each other, which is perfect for static load tests. The Tiltmeter is also able to measure temperature. It is battery powered and has a LoRaWAN wireless transmission.

The data acquisition methods can be set by the user through the Web Platform.

In-depth analysis of the Tiltmeter output

To have a precise and accurate view of the three-dimensional movement of the structure on which the Wireless Tiltmeter device has been installed, it is necessary to observe two different angles provided by the device, “Phi — φ” and “Theta — θ”, in pairs or, alternatively, a third angle defined as “3D variation angle”.

It represents the angle between the Z axis, represented on the orientation label, and its projection on the horizontal plane.

It represents the angle between the Y axis, represented on the orientation label, and its projection on the horizontal plane.

With the Web Platform provided by Move Solutions, it is possible to activate or deactivate (it is activated by default) a feature called “Data compensation”, thanks to which compensation is activated with respect to the installation position. In this way, it is possible to view the variation of inclination of the structure. The data displayed in the respective graphs therefore refer to the angular variations of Phi (Δφ) and Theta (Δθ) with respect to the initial installation position.

If the “Data Compensation” feature is deactivated, the Web Platform will display the absolute angles with respect to the horizontal plane. These absolute angles may carry on measurement errors caused by an incorrect installation — not completely parallel to the horizontal plane — of the Tiltmeter device. It is recommended to keep the “Data compensation” option always active; the measurement of the variation (Δφ and Δθ) is to be considered more accurate.

The Load tests on bridges and overpass are aimed at checking the elastic characteristics of the structures in both static and dynamic conditions. It is essential to determine the maximum deformation (under load), the percentage of residual deformation (after the removal of the load) and the response of the structure to any dynamic action acting with known characteristics.

By installing a minimum of six Tiltmeters on a span of a bridge or a viaduct, it is possible to reconstruct the static deflection of the span during a Load Test.
In order to obtain and visualize the exact lowering of the span it is necessary to correctly follow these steps:

These operations are used to make sure that the sensors correctly detect the direction of the deformation and to avoid incorrect data displays in the graphs (for example, an elevation in the bridge span under load).

Installation on the structure

Install a Tiltmeter for each of the following distances, normalized to the span length:

It is not strictly necessary that the positions are exactly those indicated, an installation similar to those shown can also be defined as correct. For example, the Tiltmeter to be positioned in 0.15 L could also be installed in 0.13 L, the important thing is to indicate its exact positioning (in this case 0.13 L) during the settings set-up on the Web Platform.

It is therefore essential to keep track of the installation positions of each specific Tiltmeter device, since these must be entered in the “Static Deflection” tool of the Web Platform provided by Move Solutions™.

Tiltmeter devices take angular measurements with respect to a reference position. It is therefore advisable, after installation on the structure, to reset all the Tiltmeters immediately before the beginning of the load test, so as to see the deformations of the structure compared to the ones immediately preceding the entry of the vehicles. In this way, the deformations are induced only and only by the stationing of the vehicles themselves on the structure. It must be considered that, especially in the case of newly built bridges, after the first loading phase there is a settlement following which the structure does not return to its original position.

Move Solutions therefore recommends carrying out a preloading operation on the structure in question, after which to reset the offset. By doing this, it will be possible to obtain more precise measurements, as they are purified from this settlement phenomena. To correctly perform this adjustment procedure of the structure under consideration, it is necessary to follow these steps:

• Wait for the span to settle in the new position, it is possible to monitor this phase via the Web Platform.

• Unload the bridge span and wait again for the time necessary for it to return to its initial position, it is possible to monitor this phase via the Web Platform.

• Access the “Settings” window of the Web Platform, in the “Tiltmeters” section, select the “Compensation” submenu, and reset the compensation using the “Reset Offset” button for all the Tiltmeters involved in the load test.

From this moment, the data collected are different from a correct position of the unloading deck.

To have consistency between the signs of the detected data and those displayed, it is necessary that the Y axis of each sensor points towards the position that has been chosen as the start (normalized position 0.00) of the span.